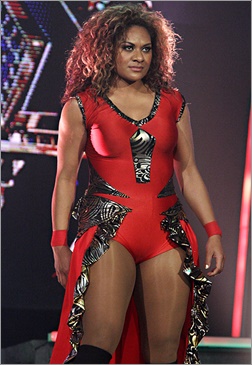 Be loyal to the royal within you. Bow Down.

Seini Draughn (née Tonga, born 27 November 1982) is a Tongan Professional Wrestler working under the name Lei'D Tapa. She debuted in 2011 in the Carolinas independent scene, winning the AIWF Women's Title

along the way. She took part in TNA's GutCheck Challenge for a chance to get on the roster, which she won. TNA assigned her to the developmental program at OVW, where she would feud with the Blossom Twins, Taeler Hendrix and Lovely Lylah. She is a former 3x OVW Women's Champion