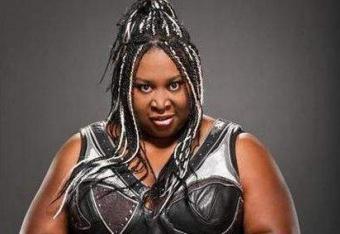 "Kong comes in peace. Kong do not want to hurt anyone. If you stay out of Kong's way, then you will be safe. However, if you choose not to, then Kong will CRIPPLE you! Kong will DESTROY you! Kong will BREAK EVERY BONE IN YOUR BODY! KONG WILL BECOME COMPLETE MONSTER!"
Advertisement:

Kia Michelle Stevens (born September 4, 1977), better known under her ring names, Amazing Kong, Awesome Kong and Kharma, is a retired American professional wrestler and actress. She was trained by Jesse Hernandez in the states and had her first match in the Empire Wrestling Federation before making her debut in Japan under the name Amazing Kong after further training from Kumiko Maekawa in the AJWP dojo. She has wrestled for various promotions such as All Japan Women's Pro-Wrestling, Fighting Opera HUSTLE, SHIMMER, Ring of Honor, TNA, WWE and CHIKARA. Among her MANY achievements, she is a 2x TNA Knockouts Champion

as Margarete with Erica (Aja Kong.)

She was also known for playing Tamme "Welfare Queen" Dawson on GLOW (2017), and her last wrestling role was with All Elite Wrestling. She announced her retirement in 2021.