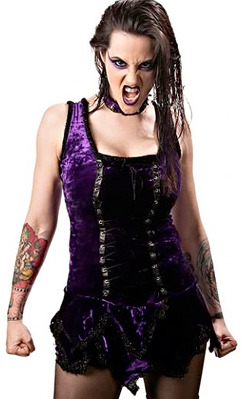 Shannon Claire Spruill (July 17, 1975 - September 1, 2021) was an American pro wrestler, manager, and announcer. Inside the ring, she is most remembered as Daffney, the Scream Queen of Mean. Outside of the ring, she was famous for her legal battles (worker's comp). She was one of the few female wrestlers trained by WCW, and of her entire era concerning wrestling in the US, who was admired for three things well before her looks: her personality, her ring work, and her vocal range (a special rarity among wrestlers).

She first appeared on WCW circa 2000 as David Flair's valet, a crazy townie who was obsessed with him, often barging into the ring herself. The two would team up with Crowbar, and she and Crowbar would become co-holders of the WCW Cruiserweight Championship, before defeating him later on to become the sole champion (after previous champion Chris Candido attacked Crowbar and Daffney inadvertently pinned him while trying to revive him). She was released by WCW on February 2, 2001 due to budget cuts, a month before WCW was purchased by its rival, the WWF.

She had a career revival in TNA as a Knockout; first as a Sarah Palin parody called The Governor, then reverting to Daffney after her split personality was ousted in the ring. In 2007, she debuted in SHIMMER as a manager, and even competed for a brief time (the espected way as Daffney and under her "Shark Girl" persona). She effectively retired from wrestling due to the injuries she sustained on Impact. Starting in 2012, she worked as a hostess and manager for SHIMMER's sister promotion SHINE.