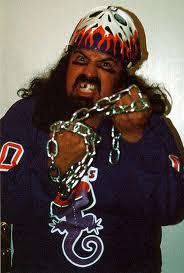 "You know what the chain of command is? It's the chain I go get and beat you with 'til ya understand who's in ruttin' command here!"
— Jayne, Firefly
Advertisement:

Sometimes the chain is all you need for a weapon, without the weight at the end. It's used much the same way as a whip or rope, and, in less realistic works, skilled users can make Instant Knots with it. The length may even vary as appropriate either with no explanation or for magical reasons.

A Badass Biker will often do this in a rumble, either normal large chain links or the slightly nastier bike chains. It was very common in 80s movies with street gangs and among fictional Japanese delinquents. And if one is very ballsy they can wrap the chains around their fists for an improvised knuckle duster, although it's heavily advised not to do it in real life unless you have something to protect your hands.

Overlaps with Breaking the Bonds and Bring the Anchor Along if the chain was being used to restrain its wielder. Chained by Fashion is when a character wears the chains as an accessory, although it can also overlap with this trope if said character chooses to make use of those accessories as weapons too. See also Blade on a Rope, Epic Flail, and Fighting with Chucks for other weapons that have chains as an important component. A kusarigama is likely to be included in Stock Ninja Weaponry. If the chains become electrified (naturally due to being made of metal), it becomes a Lightning Lash.