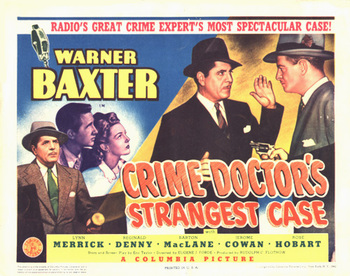 The Crime Doctor's Strangest Case is a 1943 American mystery film directed by Eugene Forde and starring Warner Baxter, Lynn Merrick and Gloria Dickson. It is the second in a series of Crime Doctor films made by Columbia Pictures.

Psychiatrist Robert Ordway (Baxter) comes to the aid of former client Jimmy Trotter (Lloyd Bridges), whose new employer, Walter Burns, is found poisoned. Having cleared Jimmy of a similar charge earlier, Ordway investigates. When the Burns family cook is revealed as an impostor, Ordway hypnotizes the housekeeper to unearth a complex web of family and business connections, revolving around the disappearance 30 years earlier of Burns' partner, and the theft of $50,000.