Film / The Man from Colorado 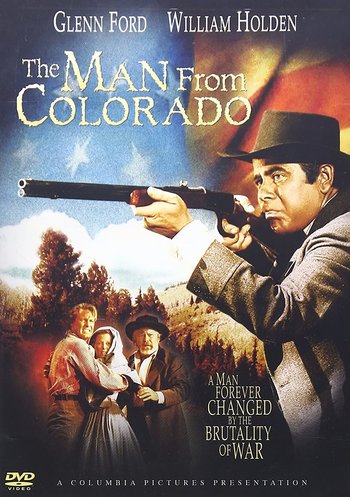 The Man from Colorado is a 1948 American Technicolor western-psychological drama film directed by Henry Levin and produced by Jules Schermer for Columbia Pictures. It stars Glenn Ford as a Union officer who becomes addicted to killing during the American Civil War, William Holden as his best friend, and Ellen Drew as their common love interest.

In Colorado at the end of the Civil War, Col. Owen Devereaux (Ford), affected by four years of brutal bloodshed, orders the massacre of a Confederate unit, even as they try to surrender. Devereaux's friend and second in command, Capt. Del Stewart (Holden), is the only one aware of the surrender attempt. Devereaux returns home to a hero's welcome and is appointed a judge, yet his irrational and angry behavior continues, affecting his fianceé, Caroline (Drew), as well as Del.