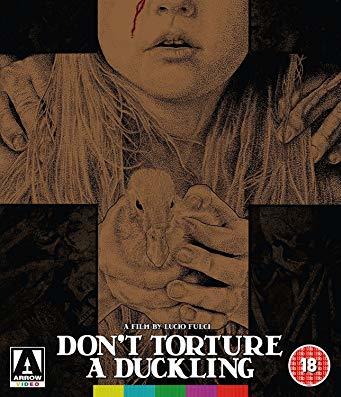 Don't Torture a Duckling is a 1972 Giallo film directed by Lucio Fulci.

When several young boys are brutally murdered in a small southern Italian village, the superstitious locals react with ignorance and violence. All misfits are immediately suspected, such as big-city tart Patrizia, local village idiot Giuseppe, and voodoo practitioner Maciara. A cop named Martelli comes to investigate, and is rather curious about a young priest, Don Alberto, who censors the town's reading material to keep it free of corruption. No one is truly innocent in this town.

The film's score was composed by Riz Ortolani, of Mondo Cane and Cannibal Holocaust fame.

The film is Darker and Edgier than most other gialli of the time period, and Fulci himself considered it his best film.