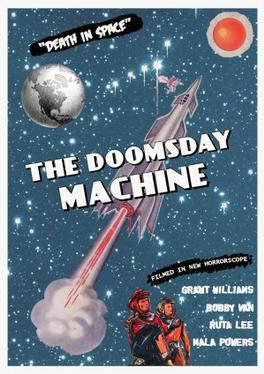 Doomsday Machine is an American science fiction film directed by Herbert J. Leder, Harry Hope, and Lee Sholem. It was mostly filmed in 1967, but completed and released without the original cast or sets in 1972.

American spies infiltrate a Chinese base and learn that a Doomsday Device is set to go off within days, with no way to disarm it. In response, a manned mission to Venus on the spaceship Astra is pushed ahead of schedule, and half of the all-male crew is replaced by women, to the objection of the men. They do not realize this is so humanity can be repopulated until they have already launched, and moments before their home planet is blown apart. But tensions are high, and only increase with the revelation that the ship cannot outpace the resulting nuclear radiation of the exploding Earth without some sacrifices.

Not to be confused with a Star Trek episode, or an animated film with the same name as this film's video release.

This film uses the following Tropes: