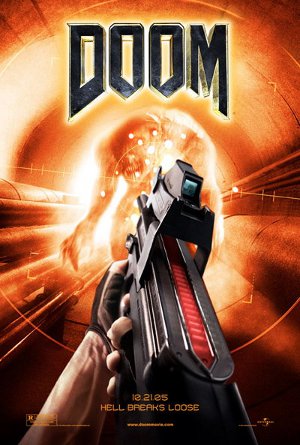 "The name's Doomguy. You spell it—" *KLA-CHACK* *BLAM*
Advertisement:

Doom is a 2005 Sci-Fi Horror film, loosely based on the Doom series of video games created by id Software. It was directed by Andrzej Bartkowiak and stars Karl Urban, Dwayne Johnson, De Obia Oparei, and Richard Brake as Space Marines and Rosamund Pike as the Determined Doctor who have to figure out what went wrong with an outpost on Mars.

In an interview with executive producer John Wells, he stated that a second film would be put into production if the first was a success at the box office. Ticket sales for the opening weekend totaled more than US$15.3 million, but promptly dropped to $4.2 million in its second weekend and the story for a sequel was never written.

Ultimately the movie wasn't poorly acted or badly written nor were the effects bad, but it still got mixed reception, carried only on the game it was based on, and related to the game mostly by shout-outs (and the monsters used) rather than the actual plot - not that the game's plot was much deeper than "you see it, you shoot it".

Nearly 14 years after the release of this movie, Universal released a second adaptation, Doom: Annihilation, Direct to Video in the fall of 2019. That adaptation is a Continuity Reboot, with no connections to this movie.