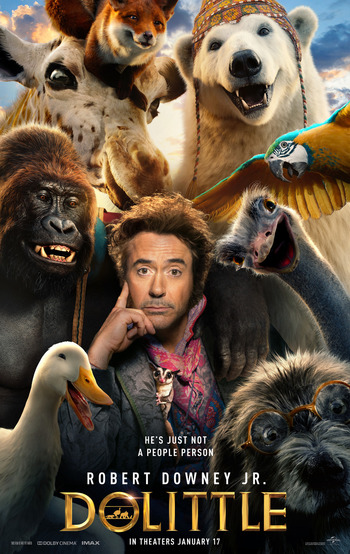 Dolittle is a 2020 fantasy-adventure-comedy film starring Robert Downey Jr. as the beloved vet with the inexplicable ability to talk to animals. Starring an all-star cast, the film is a loose adaptation of the books by Hugh Lofting.

Dr. John Dolittle was one of the finest doctors in Victorian England, whose skills were only matched by his immense love of animals. Sadly, since the death of his wife seven years earlier, Dolittle became a hermit and recluse. Hiding behind the walls of his manor, the only company the doctor has left are the menagerie of animals who live with him.

Until one day, when he receives word that Queen Victoria has fallen ill and needs his expertise. Thus, the good doctor is forced to pack his animals and sail off to a mythical island in search of a cure. And so Dolittle’s adventures begin as he regains his wits and courage, encountering old adversaries and wondrous creatures...

For the films starring Eddie Murphy which were inspired in name and concept by the books, see here. Look here for the 1967 musical starring Rex Harrison. For the Pixies album, please see here.