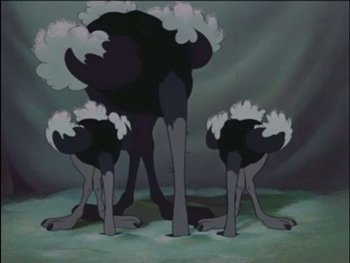 How are they supposed to sleep like that, with no oxygen flow?
Peek-a-Boo, I can't see you,
Everything must be grand.
Boo-ka-Pee, they can't see me,
As long as I've got me head in the sand.
Peek-a-Boo, it may be true,
There's something in what you've said,
But we've got enough troubles in everyday life,
I just bury me head.
— Flanders and Swann, "The Ostrich"
Advertisement:

One of the most prevalent Animal Stereotypes is the ostrich burying its head underneath the sand whenever it is frightened. The implied message being that the bird so dumb that it has No Object Permanence problems. In other works he may be doing this while sleeping.

In reality, ostriches don't put their head underneath the sand. Such a scenario would leave them sitting duck for predators not to mention risking suffocation. Just like any other animal, they will run away whenever they assume danger. Logical too, seeing that they have long, strong legs that can run over 40 miles per hour, making it extremely difficult for predators to catch them (and if they are caught those same legs can deliver deadly kicks). When they sleep they just sit down on the ground like other birds do. The head burying in the sand image is likely a perception derived from humans watching the birds from a distance and seeing them reach their long necks down to the ground to search for food or to manage their nests.

Nevertheless this Urban Legend keeps popping up in comic strips and cartoons and has even become a metaphor for people too frightened to do something about an important problem or in deep denial about it. Instead of taking action they prefer sticking their heads under the ground and wait until the problem goes away by itself.

Olivia might be a smart bird, but that doesn't stop her from being a scaredy cat.

Olivia might be a smart bird, but that doesn't stop her from being a scaredy cat.