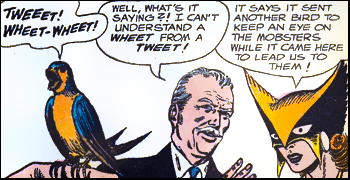 Clearly, that guy has never used Twitter before.
"Are fish really worth talking to? Our genius scientists taught a gorilla sign language, and do you know what we learned? 'Banana is pretty! Banana make gorilla happy!'"
— Seanbaby,

A character can talk to animals, and they (mostly) answer as if they, too, were human.

In the prototypical version, which usually ends up being the main character and the focus of the show, this means having full-on conversations with them, rendered in English via the Translation Convention. Most of the time we will, at some point, be shown the Translation Convention explicitly by showing the character making, say, squirrel sounds back and forth with a squirrel. Oddly, he or she can also converse verbally with animals that don't use vocal communication at all.

Note that this makes every animal in the world qualify as a Speech-Impaired Animal of sorts, since they're all at least intelligent enough to use a language. This makes carnivorousness morally sketchy for both animals and humans, but don't expect this to be addressed one bit. (Imagine what would happen if one of these characters ended up in a slaughterhouse!) Not only can someone who speaks Animal talk to every kind of animal, but every kind of animal usually seems to speak the same Animal Talk too.

It seems as if the presence of someone who speaks Animal heightens an animal's intelligence. They will verbally express an understanding of human actions that the animal's own actions up to then gave no indication of.

The ability to talk to animals is also a common superpower. In the early days, it was fairly common, but due to the perceived lameness of Aquaman-style "talking to fish", it's now most often given to the Super Team's wacky guy or Plucky Comic Relief as a sort of joke power. It's more useful when you can command the animals you communicate with; sometimes, the communication part is left out, and they can only really control animals, rather than actually converse with them. This tends to avoid the problems mentioned above, in that you might be able to assume the animals are simply being compelled to carry out the commands by whatever magic or Applied Phlebotinum gave the character the powers in the first place. Sometimes a character can make both work for them.

Speaking of which, unrelated shows with lots of magic or Applied Phlebotinum running around can sometimes result in a device that can replicate these kinds of effects for a one episode story.

Don't confuse this ability with Talking Animal, which is when an animal can naturally speak a human language. Also, note that if you shapeshift into an animal or a Beast Man, you'll usually learn how to speak Animal Talk too. See also Animal Eye Spy, where the character can see through the eyes of an animal. Compare Suddenly Fluent in Gibberish which is an ability to speak gibberish or some other made up language. If the animals they communicate with and control are "unpleasant" ones like rats or cockroaches, then they'll be a Pest Controller. A character with this ability is often a Friend to All Living Things or an Animal Lover.Don't know the difference? An Animal Lover likes animals. A Friend to All Living Things is liked by animals. May overlap with Inexplicable Language Fluency if the character is understanding wild animals they've never encountered before or if the character is a baby, since babies shouldn't be able to understand anything, let alone animal noises. Common in characters who Never Learned to Talk.