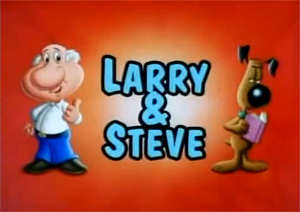 Larry & Steve is a What A Cartoon! Show short from the mid-1990s. It is about a bipedal dog named Steve and his dopey owner, Larry.

It's Steve's last day at the shelter. He has one more chance to be adopted or he's euthanized. Thankfully, a man named Larry adopts Steve because he can understand his barking.

The short is most famous for being a prototypical version of Family Guy. The short is a sequel to a 1995 short film done as a thesis film by Seth MacFarlane. It doesn't have Larry's son Milt and Larry's wife Lois in it, but Larry and Steve are mostly the same as they were in the previous short. Being aimed at kids, it lacks the vulgar humour of its successor, but the similarities are still clear. Steve has the same voice and characteristics as Brian and Larry has the same voice and characteristics as Peter. The airplane pilot who briefly appears even has the same voice characteristics (and general appearance) as Quagmire. Elements from the pilot were reused for the first two Family Guy episodes as well.