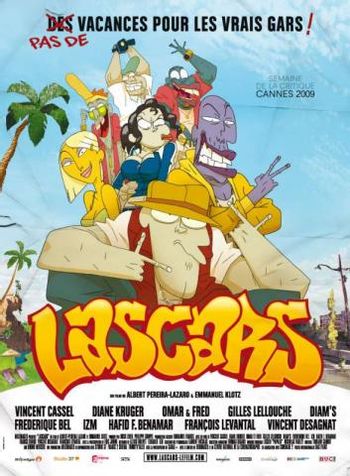 "No vacancy for true guys !"
Advertisement:

Lascars is a French animated series created by Boris Dolivet a.k.a. El Diablo. It depicts with humor the misadventures of the youth subculture influenced by Hip-Hop, the series mostly uses verlan slang and adult humour, the episodes are usually shorts (1 minute). 2 seasons (60 episodes) was made in 1998 and 2007, an unaired pilot was also made for a 20 minute series.

The series also hit the cinema with an animated movie in 2009 which features the voices of Vincent Cassel and Diane Kruger.

Lascars (the series) provides examples of:

Lascars (the movie) provides examples of: