Western Animation / Mina and The Count 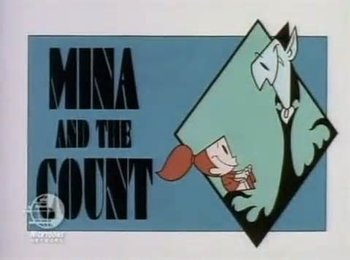 The original short, Interlude With a Vampire, features the titular Count accidentally stumbling into the bedroom of one Mina Harper, age 7, when looking for his next vampiric meal. (He was looking for Nina Parker, age 17.) Mina quickly proves to be a formidable opponent when she decides he'll make the perfect playmate, gleefully turning herself into his brand-new leg accessory. And despite being dragged into every manner of childish game by Mina, the Count quickly finds himself enjoying the experience and becomes her friend. The following shorts detailed their various goofy and spooky adventures.

Among the other shorts on the various Frederator Studios anthology shows, Mina and The Count is an interesting case. For one, it aired on two of them; while the original 'toon was made for What a Cartoon!, it ended up airing on Nickelodeon's Oh Yeah! Cartoons as well, where it proceed to become a mini series (airing five additional shorts from 1998 to 1999). Secondly, unlike the other OYC shorts that got the mini series treatment (i.e., ChalkZone and The Fairly OddParents), Mina and the Count was never greenlit as a full series. Despite this, Mina managed to built up a small fanbase throughout the years that persists to this day. Don't expect a full-length series to ever happen, however, and good luck finding the shorts on DVD.

, the 1992 CalArts student film which served as the basis for the series.

Compare and contrast with Beetlejuice and The Grim Adventures of Billy & Mandy, which both have similar premises, but one leaned more towards being a Grossout Show, and the other turns it into a cynical, over-the-top Sadist Show.

This miniseries features examples of: