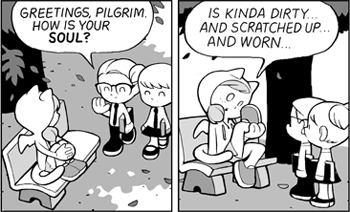 Alexander: Could they be the miners?
Fred: Oh, sure. They're, like, three years old.
Alexander: Miners, not minors!
Fred: You lost me.
— Galaxy Quest
Advertisement:

A homophone is a word or phrase that sounds like, or very similar, to something different when spoken. (Technically, only ones that sound exactly alike are homophones, but Tropes Are Flexible.) It is a case of Double Meaning, but even easier to miss, especially when read and not heard.

Naturally, this can be mined for laughs. The result is a type of Pun, but one that relies on sound instead of written language. But homophones can be used for many purposes and thus overlap with various other tropes:

Also very frequently found in the context of prank phone calls, where the full name is a homophone for a dirty phrase.

Japanese works love this kind of wordplay, since one certain reading (furigana) can refer to many things at once. Contrast Alternate Character Reading where gags are made with a set of kanji with multiple readings.

The episode commentary reveals they had made an (ultimately-scrapped) alternate scene where Gohan takes Bulma up on her offer to stay the night, interested as she is in his, uh...
Gohan: Mr. Gohan wood.

By Lucky Translation, it works even better in the French version, where the two words ("mineur") are identical.

Phil then misses the point Norma was making, discussing illiteracy.