Recap / Avatar: The Last Airbender "The King of Omashu" 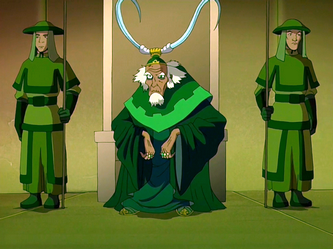 The next stop on the group's trip around the world is the Earth Kingdom city of Omashu. There, Aang shows Katara and Sokka the Omashu chute mail delivery system, which he and his friend Bumi (a Hindi word meaning 'Earth') used to ride for fun a hundred years ago. The trio give the chutes a try but run into trouble after their wild ride destroys a cabbage merchant's cart. Hauled in front of the crazy King of the city, the gang is unexpectedly given a feast. The King suspects that Aang is the Avatar and puts him through three deadly challenges to test his skills. After the last challenge, Aang is forced to figure out the King's name, and based on the nature of the challenges, he realizes that the King is his old friend Bumi. Bumi informs Aang of what his task as the current Avatar entails.