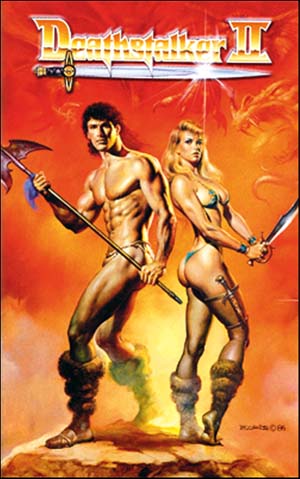 The second of the movies in the Deathstalker Series, this film is known as "the funny one". Or at least "the one that was trying to be funny on purpose".

Filmed on the cheap in Argentina in 1987, Word of God has it that the script the cast and crew had to work with was absolutely terrible even by the standards of this sort of movie. There was also the problem that their studio lot was surrounded by a highway AND an airport, the noise of which made shooting during the day all but impossible. Finally, the studio lot reportedly contained more garbage and tire-fires than the landfill next door.

Faced with all of these difficulties and left with only two weeks to finish the film, director Jim Wynorski decided to just have fun with it and created an Affectionate Parody of all the cliches of the sword and sorcery genre. Much of the film was heavily improvised, with Director Wynorksi and actor John Terlesky writing out a broad outline based in equal parts on the original script and Bugs Bunny cartoons.

The plot centers upon Princess Evie, who has been forced off the throne by the Evil Sorcerer Jarek and his Dark Chick Dragon Sultana. Replaced by a vampiric Evil Twin, whom Jarek controls from behind the scenes, Evie is forced to adopt the persona of Reena The Seer in order to lay low while searching the neighboring kingdom for a hero who can restore her to the throne. She sets her heart on Deathstalker after he saves her from the local guards and he is quickly won over by her assurances that great treasure and fame await him if he travels to the next kingdom over. Along the way, they encounter gangs of Professional Killers, an Amazon Brigade that wants Deathstalker's head for his crimes against women and an army of zombies.