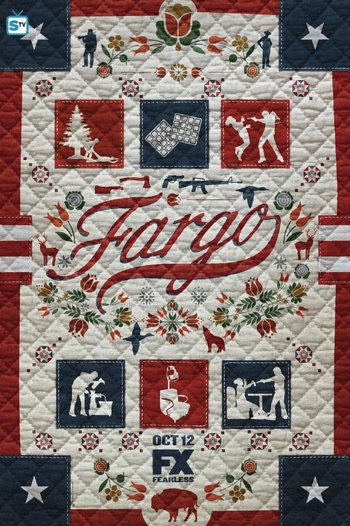 ''This is a true story. The events depicted took place in Minnesota in 1979. At the request of the survivors, the names have been changed. Out of respect for the dead, the rest has been told exactly as it occured.
—the text that opens each episode
Advertisement:

Fargo (Season Two), which aired on October 12, 2015, takes the series back to 1979 to explore the infamous-yet-mysterious Sioux Falls incident that everyone insists on vaguely recalling in the first season.

Minnesota State Police trooper Lou Solverson (Patrick Wilson) and his father-in-law, Rock County Sheriff Hank Larsson (Ted Danson), investigate an Accidental Murder scene left behind by the ambitious Peggy Blumquist (Kirsten Dunst) and her small-town-minded husband, Ed (Jesse Plemons). Their attempts to avoid the law end up entangling them in the middle of a turf war against the Kansas City mafia, with Floyd Gerhardt (Jean Smart) leading the Gerhardt crime family in their struggle after her husband Otto suffers a crippling stroke.