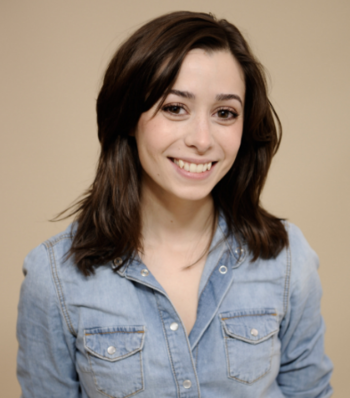 "There's nothing like theater. It's really amazing. But it does take up all of your time. I would like to get into more film, just because I find it super fascinating."
Advertisement:

Cristin Milioti (born August 16, 1985 in Cherry Hill, New Jersey) is an American actress/performer who got her start in Broadway shows. Her role in the musical adaptation of the 2007 film Once garnered her a Tony nomination and a Grammy win alongside soloist Steve Kazee for Best Musical Theater Album. Her popularity continued to grow throughout the early 2010s when she was given a recurring role in the ninth season of How I Met Your Mother as the elusive mother, introducing TV audiences to her iconic Puppy-Dog Eyes and impressive talent behind a ukulele despite previous small TV roles like Catherine Sacrimoni in The Sopranos and a sketch artist in The Unusuals.

2013 also allowed her to get behind the big screen through a supporting role in Martin Scorsese's The Wolf of Wall Street, and she received a role in the second season of the anthology crime show Fargo as Lou Solverson's wife, Betsy. In 2014, CBS greenlit the show A to Z in which Milioti played one of the leading characters, but it ended up being short-lived, lasting for one season of thirteen episodes. She's had minor roles as Whitney in The Mindy Project and Sirena in The Venture Bros. and played the leads in a few episodes of anthology series, such as Nanette in Black Mirror: "USS Callister" and as Maggie in Modern Love: "When the Doorman Is Your Main Man".