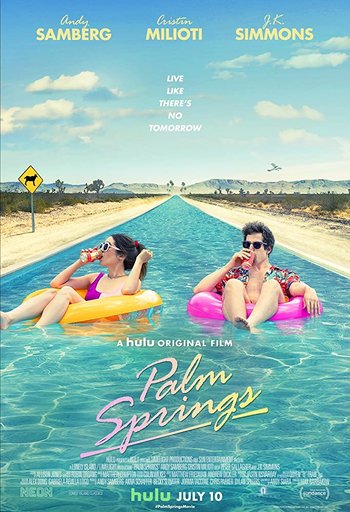 "It's one of those... infinite time loop situations you might have heard about."
— Nyles
Advertisement:

Palm Springs is a 2020 Scifi Rom Com, starring Andy Samberg, Cristin Milioti, and J. K. Simmons, and the latest in a long line of projects by Samberg's comedy troupe The Lonely Island.

While attending the Palm Springs destination wedding of her sister, Sarah (Milioti) encounters the carefree Nyles (Samberg), who has been stuck in a time-loop of the day of the wedding for years. Hilarity Ensues when Sarah accidentally becomes caught in the loop as well, and the two face the prospect of being trapped together for the foreseeable future.

Originally premiered at the 2020 Sundance Film Festival, it was jointly purchased by Neon and Hulu in a record-breaking deal note The purchase price was set at one cent more than the current record holder to intentionally generate headlines without offering significantly more money. It received a release in drive-in theaters in the US on July 10th, 2020, after the COVID-19 Pandemic forced the cancellation of a planned wide theatrical release. It was also released digitally on Hulu on the same date.

There are unmarked spoilers below. If you wish to remain completely unspoiled and only know about the basic Time Loop premise of the film, then you should not read further.

Tropes found in the film include: