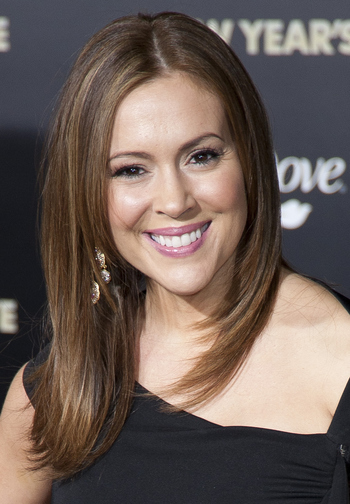 The Power of Three has set her free.
"It's nice to be important, but it's important to be nice."
—Milano's favourite saying
Advertisement:

Born in Brooklyn, New York to Italian-American parents, Alyssa started acting at a young age when she was dragged to an audition for Annie to support a friend. Through a familiar trope, Alyssa was the one chosen as the lead at only seven years old. She achieved national fame when she starred as Samantha Micelli on the sitcom Who's the Boss? at the age of eleven.

As is expected with many child actresses, once she reached adulthood, she sought to distance herself from her squeaky clean image and went after a Hotter and Sexier persona — including a sex tape scandal. She managed to avoid becoming a Former Child Star when she landed a role in Melrose Place, but it was her next project that would solidify her fame.

A drama show on the WB about three sisters who discover they are witches was being produced by Aaron Spelling. One of the potential lead actresses, Lori Rom, dropped out at the last minute and Alyssa, with whom Spelling had worked on Melrose Place, was given the call. The show was Charmed and it was a worldwide success, lasting for eight seasons and becoming the longest running female-led network show — until Desperate Housewives surpassed it. The early days of Charmed were not without some controversy — a well-publicised feud between Alyssa and the show's lead Shannen Doherty escalated in the third season, resulting in Shannen's departure. Alyssa became a producer of the show from the fifth season onward.

After Charmed ended in 2006, she has had notable roles in My Name Is Earl and Mistresses. In 2013, she settled comfortably into a role as the host of Project Runway: All Stars. Way back in the 80s, she also had a pop music career in Japan. She was also who none other than Princess Ariel was modeled after — something she did not realize until Disney asked her to host the 'Making Of' feature.

She also hosts the podcast Sorry Not Sorry, which is focused on social issues.

Tropes associated with her work.