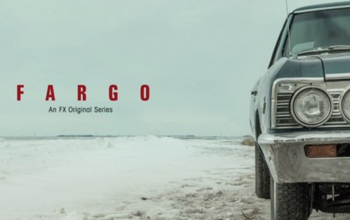 "This is a true story."
Advertisement:

Fargo is a 2014 FX crime series based on The Coen Brothers movie of the same name. It also draws inspiration from their entire library of works, while the brothers themselves take the role of executive producers alongside show creator and primary writer Noah Hawley. Originally conceived as a Mini Series, acclaim of the show's first season led to its renewal and evolution into an anthology based around crime in the snowy Midwest. Each season focuses on a new set of characters and plot, but they all exist in the same universe, with some characters popping up in multiple seasons.

Season two is set in 1979. It follows Molly's father, Minnesota State Police trooper Lou Solverson (Patrick Wilson), as he struggles to investigate a spree of murders in the wake of a gang war between the local Gerhart crime family and the invading Kansas City mob. Wrapped up in the bloodshed are a local couple: self-centered Peggy Blumquist (Kirsten Dunst) and her mild-mannered husband Ed (Jesse Plemons).

There was also a failed television Pilot Movie released in 2003

, starring The Sopranos' Edie Falco as Marge Gunderson from the movie, that failed to get picked up in spite of critical praise.

SPOILER WARNING: The plot of Fargo is pretty unpredictable, and many tropes on this page and the character page are spoilers simply by their name. Read at your own risk.