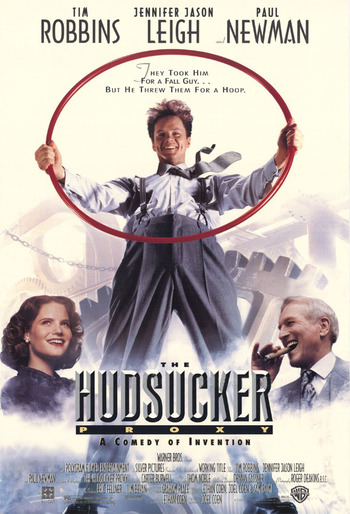 A 1994 retro-screwball comedy directed by The Coen Brothers, from a story devised by them and Sam Raimi.

Norville Barnes (Tim Robbins), a recently graduated business major, makes his way from his hometown of Muncie, Indiana, to New York City to "make it big." He winds up working in the mailroom of the monolithic Hudsucker Industries, whose CEO, Waring Hudsucker (Charles Durning), has recently committed suicide. On the day he is hired, Norville is given the task of delivering an important letter from Hudsucker to Sidney Mussburger (Paul Newman), the second-in-command at Hudsucker Industries.

Meanwhile, Mussburger is upstairs trying to calm the board of directors. Apparently, Hudsucker left no will, which means that according to company policy his majority stock share in the company must be put up for sale on the open market within six month's time. This means the company would be open to hostile takeover by whoever can buy the expensive shares. Mussburger hits upon the idea of appointing an idiot as a secret "proxy": someone who can be easily controlled and cause the company's profitability to tank without doing any lasting damage. With stock prices depressed because of poor profits, Mussburger and the other members of the board can quickly buy up the shares on the cheap when they go up for sale, and thus maintain control of the company.

Soon enough, Norville appears at Mussburger's door with the letter, but Barnes is so eager to mention his ideas for the company that he never does deliver the letter, and ends up nearly killing Mussburger during their first meeting. Mussburger comes away convinced he's an idiot... but just the right kind of idiot for his needs, and so Barnes is quickly made the new CEO of Hudsucker Industries, with Mussburger's secret plan in action, and Barnes has an idea for a new toy — you know, for kids.