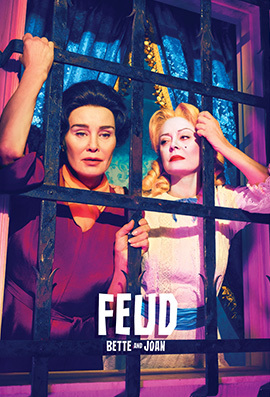 Feud: Bette and Joan is a 2017 series on FX, developed by Ryan Murphy.

The series had a troubled post-production. Renewed by FX shortly before the first season began airing, production on Feud’s second season (intended to focus on the relationship between Prince Charles and Princess Diana) stalled due to a lawsuit from actress Olivia de Havilland over her portrayal in the series. The lawsuit indefinitely shelved plans for the season with Ryan Murphy jumping ship from FX to Netflix for future projects

seemingly yielding a death knell to the series. In 2022, however, it was announced that FX would air a second season

based off the book Capote’s Women: A True Story of Love, Betrayal, and a Swan Song for an Era by Laurence Leamer. Jon Robin Baitz will be the season’s writer and showrunner, with Naomi Watts starring as socialite Babe Paley and Gus Van Sant directing all eight episodes.

Bette and Joan contains examples of the following tropes: