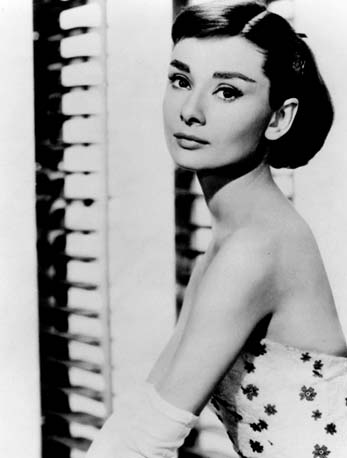 How kind of you to write her an article.
"I never think of myself as an icon. What is in other people's minds is not in my mind. I just do my thing."
Advertisement:

Audrey Hepburn (born Audrey Kathleen Ruston; 4 May 1929 – 20 January 1993) was one of the most beautiful, elegant, and – yes – iconic actors in cinema history. She never seemed to try to be iconic; it just came naturally. Whether dressed in scarves, nun's habits, or the Little Black Dress, hers was an unforgettable image. Look up the word "classy" in the dictionary, and a picture of her will be staring back at you.

A British citizen, she was born in Brussels, Belgium to a Dutch Baroness and an Anglo-Irish ne'er-do-well. Her father walked out on the family when she was young, and her subsequent adolescence in German-occupied Netherlands was quite traumatising (she helped the local resistance, witnessed deportations of Jews and almost died of malnutrition during the "Hunger Winter" caused by a German blockade). She then studied and practiced ballet in Amsterdam.

She went from one small role after another in Dutch and British film and stage productions, until she ended up in the main role in the Broadway play Gigi in 1951, which earned her much acclaim. Prominent Hollywoodian director William Wyler decided to cast her for Roman Holiday as neither his first choices, Elizabeth Taylor and Jean Simmons, were available. The rest, as they say, is history.

She was married to American actor Mel Ferrer from ​1954 to 1968 and to Italian psychiatrist Andrea Dotti from 1969 to 1982. Even in her later years, she was still a looker, appearing in Blackglama's "What Becomes A Legend Most?" ad campaign

◊, although she spent most of her later years doing philanthropic work with UNICEF. She passed away from appendiceal cancer (which was diagnosed too late) in Switzerland at the age of 63 on January 20, 1993.

She is not related to Katharine Hepburn, who was American. However, they were close friends; Katharine nicknamed Audrey "my little daughter".

open/close all folders
Films on TV Tropes:
Tropes in her works:
Portrayals in fiction:
Homages & references to her: