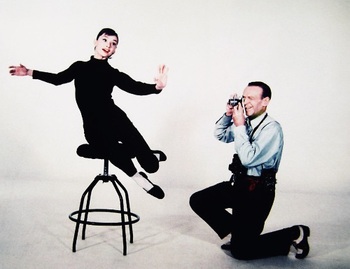 Funny Face is a 1957 musical film starring Audrey Hepburn, Fred Astaire, and Kay Thompson, and directed by Stanley Donen (Singin' in the Rain and Seven Brides for Seven Brothers), based In Name Only on a 1927 Broadway musical that also starred Fred Astaire.

Maggie Prescott (Thompson) is a magazine fashion editor looking for the next big thing — trying to find something intelligent and beautiful. She and photographer Dick Avery (Astaire) search for models who "think as well as they look". They decide to take over a Greenwich Village bookstore to use for a photoshoot, much to salegirl Jo Stockton's (Hepburn) dismay as the shop is left in a total mess.

Dick notices Jo in one of the photographs and the pair decide to hire her as a model, which Jo only agrees to so she can take a trip to Paris to meet a philosopher whose work she admires, but her snobbish attitude softens over the course of the film as she starts to enjoy the company of the handsome photographer.