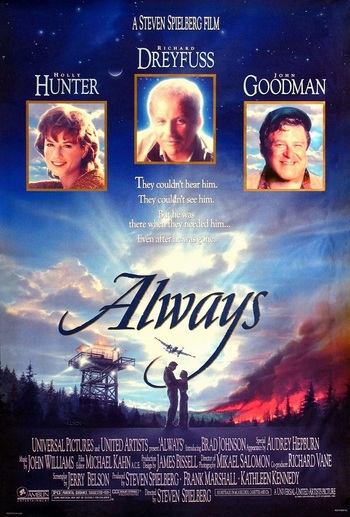 Somewhere in the mountain wilds of Colorado, a crew of aerial firefighters battle forest fires from their World War II-era planes, dropping water and flame retardant on the blazes below. The best out of all of them is Pete Sandich (Dreyfuss)... until one day when he gets a little too close and his fuel tank catches fire, causing his plane to explode in midair.

Afterwards, Pete finds himself in a burned-out forest where a woman named Hap (Hepburn) is waiting for him in a patch of new growth. Hap explains that he was killed in the explosion, and sends his spirit back to guide the next young pilot, Ted Baker (Johnson), who also is putting the moves on Pete's girlfriend, Dorinda (Hunter). And Pete finds that he is still in love with her.

The film is a remake of the 1943 film A Guy Named Joe, which had the ghost of an expert pilot inspiring a young trainee during WWII.