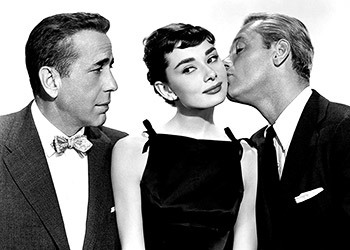 "Isn't it romantic?"
"I have learned how to live, how to be in the world and of the world ... and not just to stand aside and watch. And I will never, never again run away from life, or from love, either."
— Sabrina Fairchild
Advertisement:

Sabrina is a 1954 Romantic Comedy film starring Humphrey Bogart, Audrey Hepburn and William Holden. It was directed by Billy Wilder and based on a play called Sabrina Fair. It was Audrey Hepburn's second film, meant to capitalize on her rising popularity. The film was nominated for several Oscars and won the award for Best Costume Design, further cementing Audrey Hepburn at the top of the best dressed list for years to come. The film has become a classic of the genre. It was remade in 1995.

The story introduces us to Sabrina Fairchild, the waifish daughter of the wealthy Larrabee family's chauffeur. The Larrabees have two sons: the workaholic Linus (Bogart) and the carefree playboy David (Holden). Sabrina is madly in love with David, and tries to kill herself when he doesn't return her advances, but Linus stops her. Sabrina is then shipped off to Paris to attend culinary school, but still pines for David. She returns home extravagant and radiant, and immediately turns David's head, even though he doesn't recognize her at first. This causes problems as David is about to marry Elizabeth, who is essential to an important company merger. Linus tries to direct Sabrina's attention away from David, and unexpectedly falls in love with her himself.