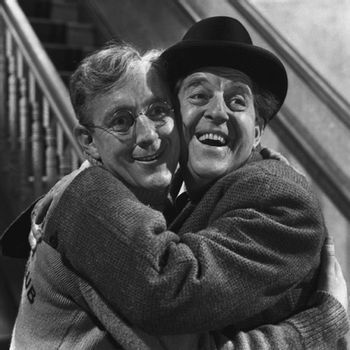 Henry Holland (Guinness) is a London bank clerk in charge of refining and delivering gold bullion. One day a frustrated artist, Alfred Pendlebury (Holloway), moves in to Holland's rooming house. Pendlebury would like to be a serious artist, but currently has a less inspiring job creating tourist trinkets—including lead paperweights shaped like the Eiffel Tower. Holland, seeing that Pendlebury has smelting equipment just like the bank does, hits on the idea of stealing the bullion from his bank, smelting it into Eiffel Tower figurines, and shipping said figurines out of England to be sold on the black market. Of course, something goes wrong.

The Lavender Hill Mob won an Academy Award for Best Screenplay. Nearly 40 years after this film, Charles Crichton would direct A Fish Called Wanda, another comedy about a heist that goes wrong. Look for a brief appearance by none other than Audrey Hepburn, prior to her Star-Making Role in Roman Holiday, as Holland's Brazilian girlfriend.