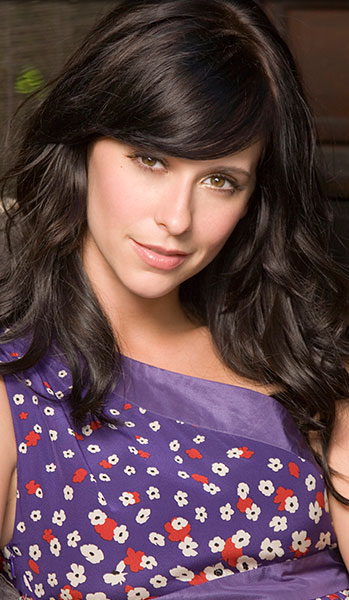 And thus My Eyes Are Up Here is averted.
"The ultimate dream in life is to be able to do what you love and learn something from it."
Advertisement:

Jennifer Love Hewitt is an American actor and singer born on February 21, 1979 in Waco, Texas.

She is best known as Julie in I Know What You Did Last Summer, Melinda in Ghost Whisperer and Sarah in Party of Five.

She's been married to Brian Hallisay since 2013, and they have three children.

Watch her in, among other things:

She has also contributed songs to several of her movies, including the aforementioned House Arrest, Can't Hardly Wait and I Still Know What You Did Last Summer.

To tell you our tropes, we have to tell you hers:

"Later days! Hahahahaha... I feel like such a dork!"