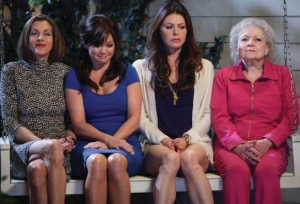 From left to right: Victoria, Melanie, Joy and Elka
Advertisement:

Hot in Cleveland is an American sitcom on TV Land starring Valerie Bertinelli (Melanie Moretti), Jane Leeves (Rejoyla "Joy" Scroggs), and Wendie Malick (Victoria Chase) as three past-their-prime entertainment industry veterans from Los Angeles. One day, their lives are changed when their Paris-bound plane makes an emergency landing in Cleveland, Ohio. Here, the group finds a welcoming community that is less shallow, youth-obsessed and weight-conscious than LA. Melanie falls in love with the place and leases a home with sassy caretaker Elka Ostrovsky, played by Betty White. It's essentially The Golden Girls with a slightly younger cast. The series, which is TV Land's first original scripted series, premiered on June 16, 2010, and was the channel's highest-rated telecast in the cable network's fourteen-year history.

The show is written by Suzanne Martin (Frasier, Ellen) and is executive produced by Sean Hayes (Will & Grace) and Todd Milliner for Hazy Mills Productions. The series is taped in front of a live studio audience at CBS' Studio City in Los Angeles using a multi-camera format.

after six seasons, though given enough run time to have a proper ending. The show debuted on June 16, 2010 and ran for six seasons until concluding on June 3, 2015.