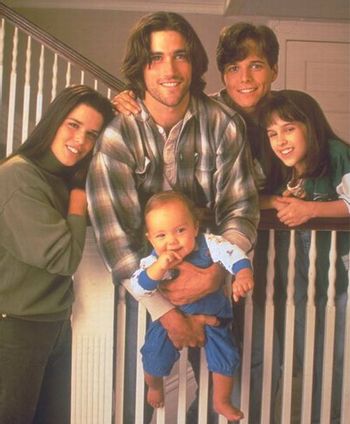 The main plot focuses on the five kids of the Salinger family who have been orphaned after their parents are killed in a car accident. Charlie (Matthew Fox), an irresponsible 24-year-old worker of odd jobs has to step up and be the new man of the house. The second oldest is Bailey (Scott Wolf), a 16-year-old responsible team mom (at least for the first few seasons). 15-year old Julia (Neve Campbell) is sensitive, and 11-year-old Claudia (Lacey Chabert) is a child prodigy. The fifth is Owen, barely a year old. During the series, they deal with issues like alcoholism, cancer, abuse, and death.

After the first season had a poor run with audiences yet a favorable reception with critics, it was Un-Cancelled due to the protests a small pool of loyal fans. The series produced another breakout star in Jennifer Love Hewitt, who played Bailey's sometime girlfriend Sarah.

It generated the unsuccessful Spin-Off Time of Your Life. In 2018, a reboot of the series was ordered; it began airing in January 2020. In this series the children's parents are not dead, but have been deported.