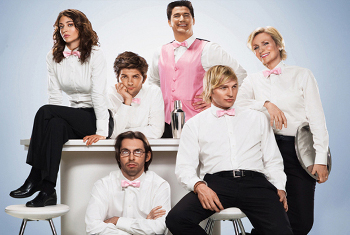 Party Down is a Work Com broadcast on the Starz network between 2009 and 2010, created by Rob Thomas (Veronica Mars). It follows a group of struggling actors and writers working a low-paying and humiliating job with the Party Down catering company while chasing their Hollywood dreams.

Each episode is structured around a different party they have been assigned to cater, with the lives of the affluent party hosts becoming entangled with the sad-sack lives of the caterers.

Despite gaining rave reviews from critics and a devoted fanbase, Party Down wound up being a Short-Runner, lasting two seasons.

from the same creative team.