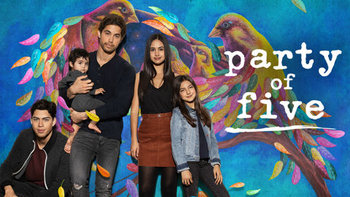 The family that tries.
Advertisement:

Party of Five is a series airing on Freeform, a reboot of the classic series of the same name.

When their parents are rounded up for deportation, Emilio, Lucia, Beto, Valentina, and Rafa find themselves without parents and staring down the prospect of being separated by child services. Hoping to keep them together, Emilio puts his dreams of being a professional musician on hold in order to care for his younger siblings.