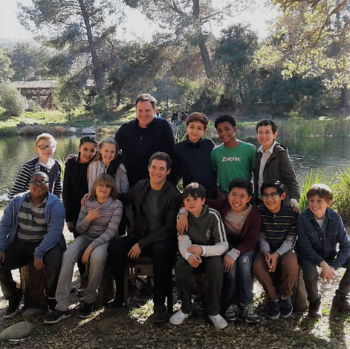 Director Mark Waters (back middle) with the cast of Magic Camp.
Advertisement:

The storyline revolves around Andy (Devine), an uptight banker who blows his shot at being a star magician in Las Vegas. At the urging of his former mentor and Magic Camp owner Roy Preston (Tambor), Andy returns to the camp of his youth hoping to reignite his career. One of the kids he has to mentor is 12-year-old Theo, who is coping with his father's unexpected death. Throughout the process, Andy finds inspiration in his ragtag bunch of rookie magicians, a display of symbiotic enrichment that is simply magic.

An Homage to the hilarious and heartwarming Disney films of the late '90s and early 2000s, such as The Parent Trap, Freaky Friday and Sky High.

It was originally scheduled for a theatrical release on April 6, 2018; but was pushed back and released August 14, 2020 on Disney+.