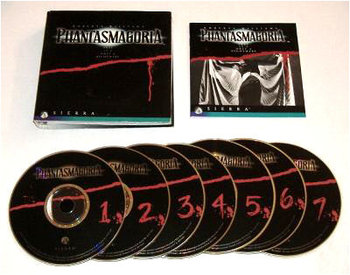 For video games, how this is handled depends on the platform. This can either be done by putting the game on a play disc and several install discs which put the assets on the hard drive. If such an option is unavailable, the player must switch disks during gameplay when prompted. Alternatively, modern games might just come with one disc and require the rest to be downloaded off the internet, but this tends to be controversial. In most modern cases, additional discs are used for Bonus Material that came in an Updated Re-release.

The following section is a history of this trope's usage in video games.

For the LaserDisc format, this was effectively inherent to the medium — one side of the disc could only hold 60 minutes for a maximum of 120 minutes on a single disc, so with movies users had to manually flip the disc in the middle of the format, similarly to a vinyl record; many higher-end players supported automatic side-switching to save buyers this trouble. Any release over 120 minutes would require two discs or more. The successor format, DVD, was also able to come in a dual-sided configuration (and with similar auto-switching high-end players), though oftentimes used it more to divide a release between Pan and Scan and Letterboxed versions of a widescreen release, or between the main film and bonus features, owing to the much greater storage capacity per side. For a film to be split across two sides of a DVD, it had to be very long, with the likes of Schindler's List and Oliver! being among a small few to hold this distinction. Even then, the digital nature of DVDs and support for a second data layer on a single side meant that studios were more likely to compress the film further to keep it on a cheaper, single-sided disc, in part because even a dual-layered DVD of this kind is cheaper to make and less of a hassle on the viewer than a double-sided one, making them more appealing.

Another common case is with the Video CD

(VCD), a variant of the Compact Disc popular in developing nations in Southeast Asia and the Middle East. VCDs have comparatively less storage space than DVDs, with video data occupying the same amount of space as audio data on an audio CD, resulting in an identical maximum capacity of 74-80 minutes. Since most movies are considerably longer than this, they tend to be spread across at least two discs on VCD releases.

In music, multi-disc works are usually associated with concept albums, live recordings, compilations (especially those containing The Best of the 70s/80s/90s/etc.), and bonus material (especially on an Updated Re-release or a Limited Special Collector's Ultimate Edition). Of course, they're not limited to these forms, but they're the most common applications of this trope in popular music; some albums might even go out of their way to be a Distinct Double Album, with each disc having its own concept or theme. It's also the norm for vinyl releases of albums since the mid-1980s that were originally created with the CD in mind, due to space constraints with the LP format.

Tropes like Disc-One Final Dungeon, Disc-One Final Boss and Disc-One Nuke are named after this concept, but are not necessarily related. The names come from the multi-disc RPGs of The '90s, where each Act of the game would be spread out over three or so discs. Thus, a Disc-One Nuke would be an overpowered weapon you can get very early into the game, or "on the first disc".

Compare Divided for Publication, where the work is divided into multiple, separately-released works due to time constraints, budget, or other issues, not necessarily space. Also compare One Game for the Price of Two, where one game is sold separately on two or more slightly different discs, but you only need one of either to play.

open/close all folders
Fan Works
Films
Music
Other
Thank you for reading Disc 1 of Multi-Disc Work. Please use the namespace list above to switch discs.