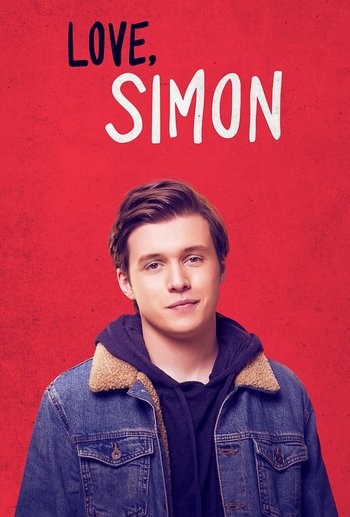 He's done keeping his story straight.
"It doesn't seem fair that only gay people have to come out. Why is straight the default?"
—Simon
Advertisement:

Love, Simon is a 2018 coming-of-age film directed by Greg Berlanti (showrunner of the Arrowverse) and written by Isaac Aptaker & Elizabeth Berger (This Is Us), based on the young adult novel Simon vs. The Homo Sapiens Agenda by Becky Albertalli.

Simon Spier (Nick Robinson) is an average high schooler in his senior year, except for one major secret — he's gay and in the closet.

Despite being surrounded by supportive people, such as his parents (Jennifer Garner, Josh Duhamel) and best friends (Katherine Langford, Alexandra Shipp, and Jorge Lendeborg Jr.), Simon is hesitant about coming out to them, wishing to finish high school as the person he was when he started it.

However, when another gay kid at Simon's school (named "Blue") anonymously comes out on the internet, Simon begins contacting him as "Jacques", and quickly falls for his faceless friend. As Simon's senior year unfolds, he —and the people around him— start learning major truths about him and one another.

A spinoff sequel series, Love, Victor, premiered on Hulu two years later. It follows a new character named Victor (Michael Cimino) who's just enrolled in Creekwood High and struggling with both being the new kid in town and his own developing sexuality. Nick Robinson is the show's narrator and occasionally reappears as Simon. Screenwriters Aptaker & Berger serve as showrunners.