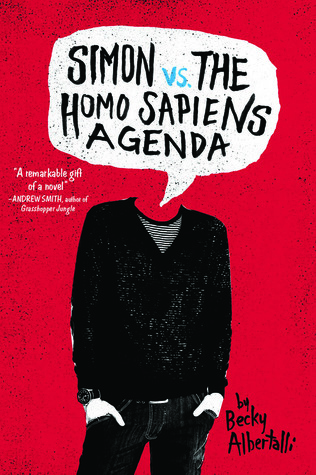 It is definitely annoying that straight (and white, for that matter) is the default, and that the only people who have to think about their identity are the ones who don't fit that mold. Straight people really should have to come out, and the more awkward it is, the better. Awkwardness should be a requirement.
—Blue
Advertisement:

Simon vs. The Homo Sapiens Agenda is a 2015 Young Adult novel by Becky Albertalli.

Sixteen-year-old and not-so-openly gay Simon Spier prefers to save his drama for the school musical. But when an email falls into the wrong hands, his secret is at risk of being thrust into the spotlight. Now Simon is actually being blackmailed: if he doesn’t play wingman for class clown Martin, his sexual identity will become everyone’s business. Worse, the privacy of Blue, the pen name of the boy he’s been emailing, will be compromised.

With some messy dynamics emerging in his once tight-knit group of friends, and his email correspondence with Blue growing more flirtatious every day, Simon's junior year has suddenly gotten all kinds of complicated. Now, change-averse Simon has to find a way to step out of his comfort zone before he’s pushed out—without alienating his friends, compromising himself, or fumbling a shot at happiness with the most confusing, adorable guy he's never met.

Albertalli's second novel, The Upside of Unrequited (2017), takes place in the same continuity and includes references to several characters, as does her third novel Leah on the Offbeat (2018) which returns to Shady Creek with Simon's best friend Leah as the narrator and main protagonist. A further novella, Love, Creekwood, was released in 2020; this time, the story is told through a series of emails sent between several returning characters (Simon, Bram, Leah, Abby, Garrett, Nick, and Taylor) during their Freshman year of college.

A film adaptation titled Love, Simon was released on March 16, 2018 starring Nick Robinson (Jurassic World) as Simon, Katherine Langford (13 Reasons Why) as Leah, Alexandra Shipp (X-Men: Apocalypse) as Abby, and Keiynan Lonsdale (The Flash) as Bram. On June 17, 2020, the film continued as a Hulu original series titled Love, Victor, this time featuring a new title character, Victor (portrayed by Michael Cimino) at its center, though Robinson returned in a limited capacity and also narrates the series.