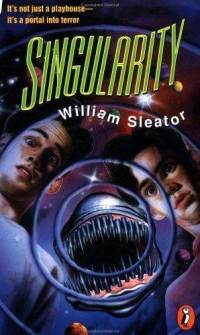 A sci-fi novel written by William Sleator for young adults. It was first published in 1985.

The novel is about two twins, Barry and Harry, who semi-inheritnote It technically belongs to their mother, but they go to check it out anyway. some property after their eccentric great-uncle dies. They discover that a metal shack (called the Playhouse) outside their uncle's home has a strange Year Inside, Hour Outside effect because something about that area acts as a portal to another universe.

This novel is an example of the following tropes: