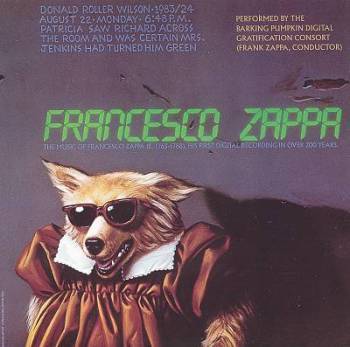 His first digital recording in 200 years!
"In every era there are some composers who have hits, and some who don't. They are both working at the same time. One of them [Wolfgang Amadeus Mozart] winds up on a candy that you get when you go on an airplane when you come to Austria. The other one: one paragraph on back of a book someplace."
— Frank Zappa, 1984 interview for Austrian television.
Advertisement:

Francesco Zappa is a 1984 album by Frank Zappa, though he was only the arranger. The music on this album was actually written by his namesake Francesco Zappa, an 18th century Baroque-era composer. Not much is known about him, and he basically languished in obscurity until this album happened.

Zappa first heard of Francesco Zappa when his daughter, Moon Unit, had looked up her father's name in an encyclopaedia for classical composers. He wasn't listed, but she did discover this 18th century Italian composer (1717-1803). Upon hearing this, Zappa ordered some scores. It turned out they weren't related to each other in any way, but the similarities that were there were uncanny. Apart from a similar sounding name and the fact that both men were composers, Francesco Zappa was born in Milan, while Frank Zappa's father was of Sicilian descent. Zappa's own music was often neglected by the general public and music critics, so he felt as if they were kindred spirits. TO hammer the point home, he found out that this 18th century composer was virtually forgotten to the point that his music wasn't even published and could only be found in a library of a Mormon Church. Thus Zappa decided to program some of these pieces into his Synclavier synthesizer and release it as an album. He was also delighted to hear that his namesake from two centuries earlier was also a little eccentric compared to most other music from that era:

"He was a contemporary of Mozart. It's kind of happy, Italian-sounding music. It's nice, and real melodic. It's interesting, too; he does a few strange things harmonically that seem to be slightly ahead of his time — a few little weird things. Basically, it's typical of music of that period, except it doesn't sound typical when it comes out of the Synclavier."

The misconception persists that "Francesco Zappa" is merely a pseudonym Zappa adopted to give him an excuse to spoof 18th century baroque music. Listeners who do know it's all by an actual 18th century composer usually overlook the album in Zappa's immense discography because it's closer in spirit to a Cover Album with Zappa's only input being the Synclavier arrangements. Still, it all sounds pleasant and quite interesting to hear, if only for the novelty factor. This was also Frank Zappa's first album completely recorded with the aid of the Synclavier. He used the instrument before on The Perfect Stranger (1984), but only in a few pieces.