Music / Them or Us 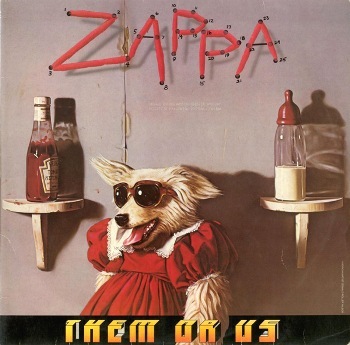 WARNING/GUARANTEE: This album contains material which a truly free society would neither fear nor suppress. In some socially retarded areas, religious fanatics and ultra-conservative political organizations violate your First Amendment Rights by attempting to censor rock & roll albums. We feel that this is un-Constitutional and un-American. As an alternative to these government-supported programs (designed to keep you docile and ignorant). Barking Pumpkin is pleased to provide stimulating digital audio entertainment for those of you who have outgrown the ordinary. The language and concepts contained herein are GUARANTEED NOT TO CAUSE ETERNAL TORMENT IN THE PLACE WHERE THE GUY WITH THE HORNS AND POINTED STICK CONDUCTS HIS BUSINESS. This guarantee is as real as the threats of ther video fundamentalists who use attacks on rock music in their attempt to transform America into a nation of check-mailing nincompoops (in the name of Jesus Christ). If there is a hell, its fires wait for them, not us.
Advertisement:
The disclaimer sticker on the album.

Them Or Us is a 1984 album by Frank Zappa. It's seen as one of the better albums he released during The '80s and beloved for "Be In My Video", "In France" and his epic cover of "Whippin' Post" by The Allman Brothers Band.

Zappa brought out a companion book, "Them Or Us", the same year with lyrics from several of his screenplays printed. Some of them unreleased up until that point, including Hunchentoot, a play that has remained in Development Hell forever. Other lyrics are from his albums Studio Tan, Sleep Dirt, Joe's Garage, Ship Arriving Too Late to Save a Drowning Witch and Thing-Fish.

CD reissues are on a single disc