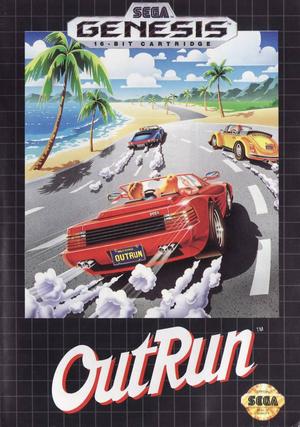 A driving game first to hit the arcades in 1986, OutRun amounts to a time-attack Speed Run. You, a manly man in his Ferrarinote specifically a 1986 Ferrari Testarossa convertible; later ports change it to something similar but legally distinct, start at the start line, and Race Against the Clock to a Checkpoint at the end of the stage. You are accompanied by a token female passenger, who presumably was attracted solely by the horsepower. Along the way, you must avoid other motorists and assorted roadside obstacles, lest you crash in a variety of entertaining ways. Just before that checkpoint, the road forks into two, and each fork will allow you to access a differently-themed area; generally, the right-facing path is more difficult than the left-facing one. Get through five stages, and you reach the finish line. Depending on the route you take (and the final stage you reach), you'll get Multiple Endings.

The game was successful enough to get itself ported to the Sega Genesis (and pretty much everything else of the same generation as the Genesis), and spawned lots of sequels. They all follow the same formula, though several of them add an opponent to race against in addition to the clock and standard traffic.

To date, the series goes as follows: