Video Game / Over the Hedge 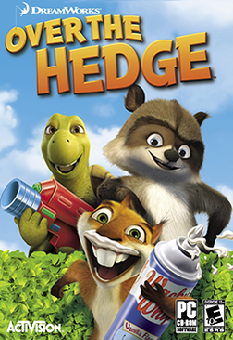 The Video Game adaptation of the DreamWorks Animation film Over the Hedge, developed by Edge of Reality and published by Activision in 2006 for the Nintendo GameCube, PlayStation 2 and Xbox.

Unlike most video games based on movies, this one starts at the climax of the film, with RJ having his change of heart and the animals defeating Gladys, Vincent, and Dwayne, leaving the forest animals free to do as they please.

Afterwards, the game jumps forward in time to one year later, when raiding people's houses for food and other things has become routine for the Hedgies. One day, however, they come home to find all their food has been stolen and their stuff broken. As it turns out, Dwayne the Verminator, known to the animals as "The Sniffer", has returned with an army of brainwashed animals, all of which are controlled using mind control caps that he has invented. From this point on, the game sees the Hedgies resume stealing food from the humans as well as a variety of other devices, including a laptop, a film projector, a popcorn machine, a cotton candy machine, and even a satellite dish from Vincent's cave, among other things.

Playable characters include RJ, Verne, Hammy, and Stella. While playing, you can use weapons such as golf clubs, plungers, baseball bats, etc. to fight enemies. You can also throw long range weapons, such as frisbees or boomerangs. There are various toy guns thrown about the game as well, like a ball launcher.

As a side note, versions for the Game Boy Advance and Nintendo DS were also made, though these were different from the console versions and revolved around the events of the movie and the animals trying to get endangered species to move into the area to prevent it from being destroyed, respectively. The latter also introduced Dwayne's brother, Henri, who is a taxidermist.

This game provides examples of the following Tropes: