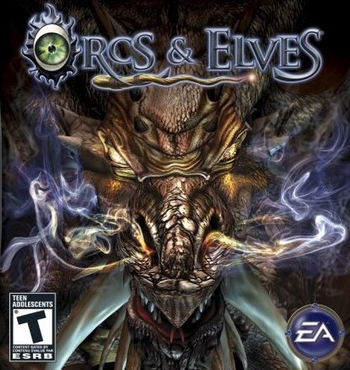 Orcs & Elves is an Action RPG, developed by John Carmack and Fountainhead Entertainment, produced by id Software, published by EA Mobile and licensed by Nintendo for the DS version. It was first released on the mobile phones on May 1, 2006 before being ported to the Nintendo DS on November 15, 2007. The game is based on Doom RPG's engine and is id's first original intellectual property since Quake. The later DS port of the game included graphical enhancements, such as 3D environments and camera cutscenes, along with improved character sprites, two new levels and the use of the touchscreen feature.
Advertisement:

The game is described as an adventure-RPG, in which the protagonist, a young Elf must retake a dwarven city from the evil army of Orcs occupying it. A sequel, titled Orcs & Elves II, was released on mobile phones in 2008 as well.

Player’s take control of the protagonist Elli, an Elf warrior and son of the famous Elf adventurer Eöl. Despite his heroic position, Elli is never seen outside of the player’s first person perspective (except in concept art found online or unlockable in the DS version) and never directly speaks to other characters. However, Elli wields a wand known as Ellon, that not only can speak but exchanges dialogue with others throughout the story, making Ellon Elli’s form of interaction. Despite being only a wand however, Ellon embodies an almost human personality, in many instances often exchanging jokes or arguments with friend and foe alike.

Another prominent character is King Brahm, king of the Dwarf mountain city of Zharrakarag and friend of Elli’s father, Eöl. While not initially seen at the beginning of the story, Elli must locate him in order to learn more and eventually track down the perpetrators of the Orc invasion. Other friendly characters encountered throughout the game are the ghosts of the fallen dwarf inhabitants, who despite their demise aid the player through guiding them and unlocking impassable doors. Some of the dwarf ghosts are encountered multiple times, such as Sarbok, a dwarf ale brewer who will invite Elli to drink with him before continuing with the quest on several occasions and Nestri, the first dwarf encountered, proving to be a key ally throughout.

Another recurring character is the dragon Gaya, who sits in a lair near the top of the mountain guarding a vast treasure who uses it to trade with adventurers and the dwarves, where King Brahm made a deal with the dragon as a supplier. Elli can teleport to in between levels via portals and can even trade rare artifacts for better, more expensive equipment.

Not to be confused with Of Orcs and Men, a 2012 Multi-Platform RPG where you play as an Orc-Goblin duo.