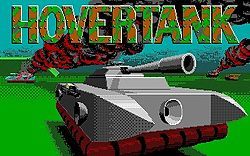 Hovertank 3D is a vehicular combat game developed by id Software and published by Softdisk in April, 1991. It is considered a significant precursor of the first-person shooter genre, made popular by id Software's subsequent releases, Wolfenstein 3D and Doom. It is sometimes inaccurately claimed to be the first 3D game for MS-DOS, although it was preceded by several others which incorporated free movement within 3D environments, including Interphase, Mech Warrior, Corporation, Microsoft Flight Simulator, Elite, Alpha Waves, Starglider, and Starglider 2. The game used the same combination of scaled sprites and drawn walls that would later show up in Catacomb 3D and Wolfenstein 3D, but the walls in Hovertank 3D were in solid color, without any textures.

Hovertank 3D is set during a nuclear war. In Hovertank 3D, the player controls Brick Sledge, a mercenary hired by an unknown organization (referred to by the game as the "UFA") to rescue people from areas under the threat of nuclear attack (largely political activists), both by the government and by large corporations. However, the areas are also full of mutated humans, strange creatures, armed guards, and enemy hovertanks.

Not to be confused with another (newer and unrelated) game of the same name.