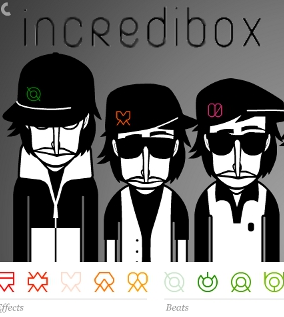 Pump It Up and Chill!

is a musical beatbox game and website developed and published by the French company So Far So Good. The concept is simple and consists of drag-and-dropping sound icons on different characters to do beatbox. The player can find combos to unlock animated bonuses and record mixes to integrate a ranking. An automatic mode is also available to generate an endless composition of randomness.

Part game, part tool, part toy, Incredibox is a music-making app in which the user can create a mix by managing a group of beatboxers. Once one of the available versions (or styles) has been chosen, the player finds himself in front of an interface made up of seven blank characters and twenty sound icons. These icons are divided into the following categories (five for each of them): beats, effects, melodies and voices. Each icon is a unique a cappella sound loop to drag-and-drop onto the characters from a range of hats, sunglasses, masks, headphones or other items that dress them as they are used and let them sing in rhythm with each other. At this point to fine tune his mix, the player can also swap out new sounds, mute sounds, do a solo on one of them, find combos to unlock animated bonuses and record all those interactions to share it on social media via an URL. Then contributors can listen and vote their favorite tracks all the way to the Top 50 chart of Incredibox. And for those who just want to listen an endless mix, an automatic mode can play the loops of each version at random.

The game have seven versions in the game that the players can choose from. Each version has a different musical style with a unique theme to it. The first four versions were released online on the official Incredibox website and they can be played both on the website and the mobile apps. The remaining versions of the game are exclusive, and they can only be played on the mobile apps.