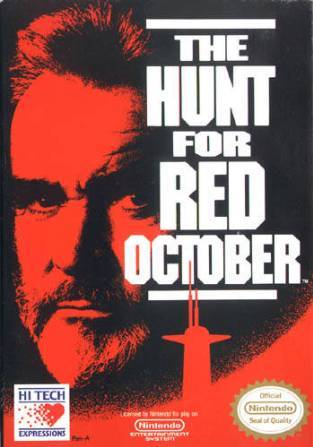 The story is just about the same as the movie. You play as Marko Ramius, and he's supposed to take the submarine through trial run and naval tests, but he has different plans. He wants to lead the submarine to the US port, not that the Soviets will let him. They use the Red Fleet to track down and destroy the Red October. It's up to him to get the sub through safely.

There's a total of seven levels, at the end of each is a boss fight. The submarine can shoot limited missiles and unlimited torpedoes. It also needs power, which acts as fuel to survive. Some versions of the game have exclusive features. The NES version's final stage is a platformer, in which you try to stop saboteurs in the submarine, while the SNES version has bonus stages compatible with the Super Scope.