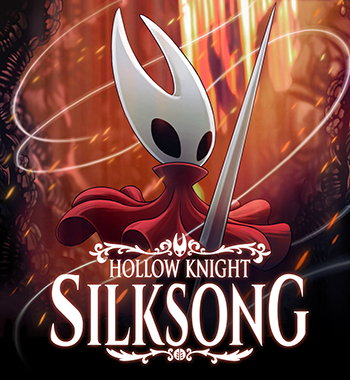 A familiar princess explores a new kingdom of silk and song
They see your beauty, so frail and fine,
They see your peace, woven of faith and toil,
They forget your heart, bound in slumber and servitude,
When you wake, they shall see your truth
A beast's nature, bare to all.
—from 'Pharloom’s Folly' by the Conductor Romino
Advertisement:

Hollow Knight: Silksong is the upcoming sequel to the hand-drawn 2D action Metroidvania Hollow Knight, created by Australian developer Team Cherry. The game will be released for PC via Steam, Humble Bundle and GOG, as well as Nintendo Switch.

Following the events of the first game, Hornet, now princess-protector of Hallownest, finds herself alone in a vast, unfamiliar haunted kingdom of Pharloom. She must battle foes, seek out allies, and solve mysteries as she ascends on a deadly pilgrimage to the kingdom’s peak. Bound by her lineage and guided by echoes of her past, Hornet will adventure through mossy grottos, coral forests and shining citadels to unravel a deadly thread that threatens this strange new land.

The game features Hornet as the new protagonist, the new kingdom of Pharloom to explore, 150 new enemy types, new bosses, new gameplay mechanics with Hornet's needle and thread and arsenal of tools, and an all new score by the first game's composer, Christopher Larkin.

The game was announced in February 2019, although a release date has not been announced.