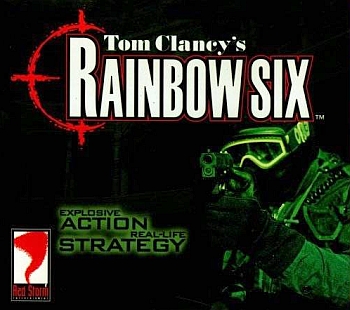 "This is your team. Trust each other above all else. On the field, we are a family. We work together and we protect each other. Let everything else go. Got it?"
— Bishop
Advertisement:

The Rainbow Six series was the originator of the tactical shooter genre, and was responsible for launching the wave of Tom Clancy's military-themed video games. The games detail the adventures of covert international anti-terrorist strike force "Rainbow", and their battles against the world's terrorist element.

Contrary to popular belief, the games and novel were not planned as a franchise. The game series started life as being about an FBI hostage rescue team,

but Red Storm Entertainment wanted to replace the FBI with a fictional group to give the game international appeal. Coincidentally, Clancy happened to be writing his novel at the time, and a license deal was struck. The game actually came out before the book, and the plots diverge halfway through, though they keep the same villains.

The original Rainbow Six, released for the PC in 1998, was a first-person combat game which was revolutionary for its realistic combat, feature slow and steady character movement and one-shot-kill gameplay, in contrast to the One-Man Army approach taken by all previous First-Person Shooter games. The most notable feature was the tactical planning map before each mission, in which you organized up to 4 separate fireteams and planned out their movements throughout the map, allowing you to plan out and implement complex maneuvers using multiple teams. During the mission itself, you controlled 1 team while the computer A.I. controlled the other 3 teams following the path and instructions you laid out in the tactical planning map. Players could switch to direct control of any team and any team member on the fly. It was critically acclaimed for its serious, tactically deep gameplay and received an expansion pack: Eagle Watch, which added characters from the novel to the team roster.

The sequel, Rainbow Six: Rogue Spear, was released the following year. It was essentially a Mission-Pack Sequel, featuring little new in terms of gameplay and instead improving on what already existed with new missions, better graphics, more weapons and equipment and improved tactical combat. Despite lack of any significant improvement it was well received, and was followed by three expansion packs: Urban Operations, Covert Ops Essentials and Black Thorn.

Rainbow Six 3: Raven Shield for the PC retained the series' tactical gameplay, while updating the presentation to the standards of modern First Person Shooters, with features such as visible weapons in the player's first person point of view, and an improved graphics engine based on the Unreal Engine 2.

However, the series deviated from its tactical shooter roots starting with the Xbox version of Rainbow Six 3. Rather than being a straight up port of the PC version, the game was heavily refined. Most significantly, the gameplay was made simpler and much more accessible. For one thing, it did away with the tactical map for more straightforward linear levels, with the player controlling a single character (though still backed up by 3 A.I. controlled teammates as they could be in the original) and moving from start to finish through linear levels while mowing down a small army of terrorists. Gameplay was much more forgiving, with players able to survive several assault rifle shots before dying, and the game played out much more like a standard First-Person Shooter than the previous games in the series (although the inability to restore lost health in the middle of a mission resulted in the retention of some tactical challenge). The fourth game in the series, Rainbow Six: Lockdown, continued down this path while incorporating much-hated sniper missions.

A mission-pack prequel to Lockdown named Critical Hour, which featured a series of missions from previous games reinterpreted with Lockdown's new gameplay system, was released exclusively on Xbox but its poor sales and bad reviews led to the cancellation of a PlayStation 2 and PC port.

Rainbow Six: Vegas and Rainbow Six: Vegas 2, are in many ways Rainbow Six In Name Only, being a hybrid first-person/third-person shooter with cover-based gameplay, somewhat similar to Gears of War or Perfect Dark Zero, and featuring a Regenerating Health system and standard First-Person Shooter-style combat, albeit with considerably more difficulty than most shooters considering the player character is still easily killed even while wearing heavy armor. Although Vegas was critically acclaimed for its gameplay and presentation, it's a far cry from the series original tactical shooter roots.

Rainbow Six: Patriots was announced in 2011 after some footage was leaked. However, the game was stuck in Development Hell for a time before finally being cancelled.

Rainbow Six Siege, was first debuted at E3 2014 and released on Dec 1, 2015. Siege's story doesn't have much connection to the previous games, instead focusing on a new group of Operators recruited by a new Six to face a mysterious new terrorist force called The White Masks. Its gameplay is also a radical departure from the previous games, being a multiplayer-focused competitive shooter akin to Counter-Strike, but does feature many realistic elements such as destructibles, as well as many unique elements such as specialty-based ability and gadgets.

Rainbow Six Extraction, a Spinoff of Rainbow Six: Siege was announced at E3 2019 and released worldwide on January 20, 2022. The game involves the Siege operators as they tackle an alien parasite threat, and will be co-op PVE based.

For the series in general:

For the Vegas series: